You are here:  home / Robert Louis Stevenson / A Child's Garden of Verses

A Child's Garden Of Verses

A Child's Garden of Verses is a book of poems for children written by Scottish author Robert Louis Stevenson. 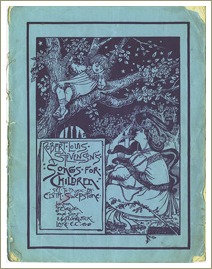 The original 1885 cover of the first edition

The poems were written from Stevenson's memories of his own childhood and are perfect for sharing with children, even when they're still babies. In fact, babies and young children love the rhythm of the poems in A Child's Garden of Verses and it's actually really important for their development that they hear them read aloud.

My mother read these poems to my sisters and I when we were children and many years later I had a wonderful time sharing them with my own three children.

About A Child's Garden of Verses

Robert Louis Stevenson suffered from ill health all his life and as a child was often sick and had to stay in bed. His nurse, Alison Cunningham - 'Cummy' - cared for him during these time, telling him stories from the bible and from Scottish history.

In later life he said:

"I have three powerful impressions of childhood: my sufferings when I was sick, my delights in convalescence at my grandfather's manse of Colinton, near Edinburgh, and the unnatural activity of my mind after I was in bed at night."

Stevenson was an intelligent child and his nurse's stories sparked his imagination. He was also very observant, noticing the small details - in nature especially - that he would later write about in his poems.

Some of the poems in A Child's Garden of Verses recall the time he spent in bed when he was ill, especially 'The Land of Counterpane' (counterpane is an old word for a bedspread). Other poems were obviously inspired by the time he spent at his grandfather's home in the country, often with his cousins. Some of them - like 'Pirate Story' - are about the make-believe games all children like to play. Others - especially in the section called 'The Child Alone' reflect the loneliness Stevenson felt when he was ill and without any playmates.

My favourite poems from A Child's Garden of Verses are the classics:'The Land of Counterpane', 'Bed in Summer,' 'My Shadow', 'The Cow', 'Time to Rise' and 'The Swing.' These are the ones I clearly remember my mother reading to me when I was quite small and I've always loved them. To my delight, my own children loved them too!

To read more about Robert Louis Stevenson and his interesting life, click here.

A Child's Garden of Verses

This is a list of the poems contained in A Child's Garden of Verses.

The book is divided into several sections, each one with a sort of theme which ties the poems together. You can read some of my favourite poems here.

A Child's Garden of Verses: About the Book

The 1994 version I bought when my sons were born had particularly beautiful illustrations by Joanna Isles. Unfortunately this version seems to be out of print at the moment but there are many other versions to choose from.

A Child's Garden of Verse: Dedication

Robert Louis Stevenson dedicated A Child's Garden of Verses to his nurse, Alison Cunningham. The dedication itself is quite beautiful. Here it is:

For the long nights you lay awake
And watched for my unworthy sake:
For your most comfortable hand
That led me through the uneven land:
For all the story-books you read,
For all the pains you comforted,
For all you pitied, all you bore,
In sad and happy days of yore: -
My second Mother, my first Wife,
The angel of my infant life -
From the sick child, now well and old,
Take, nurse, the little book you hold!
And grant it, Heaven, that all who read
May find as dear a nurse at need,
And every child who lists my rhyme,
In the bright fireside, nursery clime,
May hear it in as kind a voice,
As made my childish days rejoice! 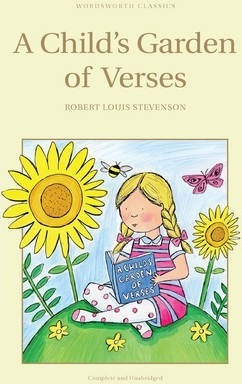 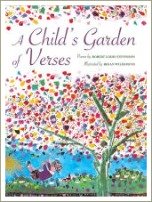