Little Golden Books are a part of most people's childhoods. But do you know how they came into being?

It's an interesting story which dates back to 1940 and one man's idea to make children's books more accessible to average American families who would otherwise not be able to afford to buy them. 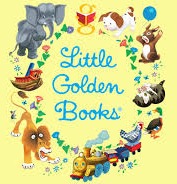 Back in 1940, children's books sold in the US for about $2-$3 each. This doesn't seem like much money now but it was a lot in those days and many families simply couldn't afford to buy them. For other families, buying books for their children was a luxury. Some lucky children received books for birthday and Christmas presents but other children simply didn't own any at all.

And it was the same in other countries. My parents grew up in Australia in the 1940s and the books they received as gifts were treasured possessions. I still have some of them, complete with the precious inscriptions on the fly-leaves from aunts, uncles and grandparents who are now long-gone.

In 1940, a man called George Duplaix was aware of this situation and wanted to change it. He was then president of the Artists and Writers Guild, a division of Western Publishing whose job it was to develop new children's books. Duplaix came up with the idea of creating a colourful children’s book that could be sold at a much cheaper price, making it affordable for most American families.

At the time, Western Publishing shared a printing plant with Simon & Schuster and the staff of the two companies had a close working relationship. A working group was formed made up of staff from both companies and the group decided to publish twelve titles for simultaneous release. The guidelines they developed for what was to be called the Little Golden Books Series were simple: each book would have 42 pages, 28 printed in two colours and 14 in four colours. The books would be staple-bound and sold at a price of 25 cents each.

The first 12 titles were printed in September 1942 and on 19 September 1942 the first advertisement announcing the release of Little Golden Books appeared in Publishers Weekly. The books were released to stores in October 1942.

The books were hugely successful right from the start. In February 1943 - just five months after they first came on the market - the first twelve Little Golden Books were in their third printing, bringing the total number of books printed to 1.5 million copies.

By 1945, most of the original 12 Little Golden Books were in their seventh printing. By 2001, nearly 15 million copies of The Poky Little Puppy had been sold, including copies in various languages.

These are the original 12 books published in 1942 as the first Little Golden Books.

The Poky Little Puppy is still in print but, of course, there are now hundreds of other titles in the Little Golden Books series. 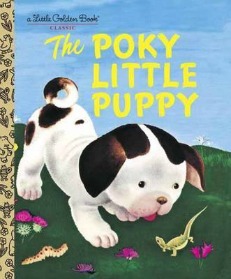 Many of these books became best sellers and in 2001 The Poky Little Puppy was the top-selling children's book of all time. And it's still in print today!

To find other Little Golden Book titles to buy, click here or use the search bar on the top right of this page.