My daughter and my gorgeous nephews loved the Tashi books.

This series is loads of fun and it's a winner with kiddos aged from six to about nine.

There are 16 books in the series, all short-ish chapter books, perfectly-suited to younger readers and very inexpensive to buy, especially online. Each book contains two exciting Tashi stories.

The books were written by Australian authors Anna and Barbara Fienberg (a mother and daughter) and they really are gorgeous, especially if you're looking for a gift for a special kiddo.

There is also a series of "big books", compilations of several Tashi stories, and these also make brilliant gifts.

In the first story in this book, Jack has a new friend  called Tashi, who comes from a place very far away.

Learn how Tashi escaped  from a war lord and flew to this country on a swan.

In the second story, 'Dragon Breath', Tashi tells Jack about  the time he tricked the last dragon of all.

Tashi and the Giants

In the first story in this book, Tashi encounters Chintu the giant, who is as big as a mountain.

In the second story, 'The Bandits', Tashi is kidnapped by  robber bandits, who want him to be their son. Only someone as clever as Tashi could find a way to escape.

Tashi and the Ghosts

No one in the village is as brave as Tashi ... only he could  scare the ghost monsters out of the forest.

In the second story in this book, 'The Mountain of White  Tigers', bold Tashi goes all the way along the dark underground passage to the Mountain.

Tashi and the Genie

Jack is bursting to hear Tashi's fantastic stories about the  sly genie and his three wishes.

And in the second story in this book, 'Tashi and the Stolen  Children', Tashi comes face to face with the ferocious war lord again.

Tashi and the Baba Yaga

'Baba Yaga reached over and pinched his arm. "You look a nice juicy boy..."'

In the second story in this book, 'Gone!', the wicked Baron traps Tashi as a prisoner for the fearsome River Pirate. 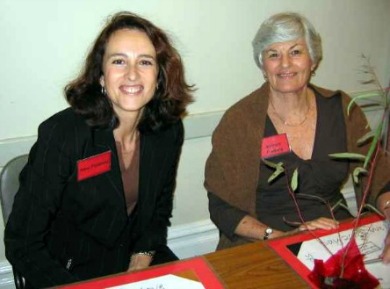 Tashi and the Demons

'The demon's dagger teeth glinted. "I'm going to tie you up and tip these spiders over you"'

Spiders and snakes and rats? The slippery demons are going to make Tashi talk...

In the second story in this book, 'The Bell', there's more trouble for Tashi when the fierce River Pirate returns without a warning. Tashi's life is one big adventure.

Tashi and the Big Stinker

'The giant just lifted the roof off, scooped up a pig and gobbled it down.'

Chintu the giant's Only Brother will eat everything in the village unless Tashi can stop him.

In the second story in this book, 'The Magic Flute',  things go terribly wrong when a stranger appears with a magic flute. Tashi acts fast in the face of trouble!

Tashi and the Dancing Shoes

'The crowd gasped in amazement. "Look at those shoes! Look at him fly!"'

Jack's Uncle Joe loves to tell stories, and so does Tashi - like the one about the magic shoes and Uncle Tiki Pu's sneaky plan.

In the second story in this book, 'The Fortune Teller', find out what Tashi did when the fortune teller, Luk Ahed, said that his tenth birthday would be his last. There's no stopping Tashi.

Tashi and the Haunted House

'Don't go near the ghost house. Who knows what is prowling around in there!'

There's a light in the window of the haunted house, and Tashi is going in...

In the second story in this book, 'The Big Race', Tashi's brave, but is he fast enough to beat two mysterious strangers in a race around the village? And what will happen if he loses? No one has adventures like Tashi.

Tashi and the Royal Tomb

'Everything around me went still...the warrior's eyes were following me'

Spooky things happen when an ancient burial site is discovered in the village and Tashi is nearly buried alive!

Then in the second story in this book, 'The Book of Spells', a precious book disappears and the villagers won't be safe until Tashi finds it. Where there's mystery and action, there's Tashi!

Tashi Lost in the City

'I raced up and down the street looking in doorways and behind stalls. But there was no Grandma.'

Tashi always has big adventures, like the time he's lost in the city and has to escape from a mean man with a glass eye and a silver dagger.

Then, in the second story in this book - 'On the Way Home' - Tashi and Grandma are kidnapped by brigands called Fearless and Ferocious. Clever Tashi always knows what to do - stay calm, think hard and move fast.

Tashi and the Forbidden Room

'We arrived at the tower at the top of the castle. The door was locked. "We can't go into that room," said Ho Hum. "Not ever.'"

Tashi tells Jack about his scariest adventure ever, when the mysterious stranger Bluebeard moved into the old castle. Nobody knew what a monster he was.

In the second story in this book, 'The Three Tasks', the wicked Baron's prize peacock goes missing and his poor dog Pongo will be killed unless Tashi can complete three impossible tasks. When the going gets this tough, it's all up to Tashi!

Tashi and the Stolen Bus

The demons are crazy for buses!' said Can-Du.  And when I wouldn't hand this one over, they kidnapped my son.'

What will Tashi do when the demons sneak onto the new bus going to market? How will he find Little Can-Du?

In the second story in this book, 'The Mysterious Thief', things are disappearing from the village, and it's up to Tashi to catch a thief red-handed. See how scared and brave our Tashi can be - and what exciting stories he has to tell.

Tashi and the Mixed-Up Monster

Much-to-learn has got it wrong again - he's magicked up a hideous monster that's bursting out of the garden workshop. And it's coming Tashi's way!

In the second story in this book, 'Guilty or Not?', everyone believes that Tashi killed Soh Meen's golden carp. The only way Tashi can clear his name is to find the real culprit. But how?

Tashi and the Phoenix

"We Phoenix are not born to be some Warlord's plaything. We must be free to soar the heavens."

Tricky Uncle Tiki Pu has put Tashi's family at risk by boasting to the Warlord that he has captured the most dazzling creature in the world. And now the Warlord wants to see it, or else.

In the second story in this book, Princess Sarashina has sent a letter to Tashi because her sister must marry the cruel and sneaky Khan. Can Tashi make the Emperor see what Khan is planning?

It takes more than courage to deal with Warlords and Emperors, but Tashi always has a clever idea and something useful in his pocket.

Tashi and the Golem

The Baron's nephew Bang-Bang is going to take over Wise-as-an-Owl's fresh water spring, which he uses for his medicines, so Tashi and his friends use clay and magic to make a golem who will give the bully Bang-Bang a good scare.

But will their great big Golem obey them? And can Tashi rescue Ah Chu's Little Sister when Bang Bang's trouble-making brother gives her away to the River Pirate? Sometimes there’s no time to think - Tashi just has to act fast!