Playing some simple word games for kids when you read aloud to your child is a fun way to help him learn the skills he'll need to learn to read later on.

This is because playing word games is a great way of developing children's phonological awareness and language skills.

Getting Started With Word Games

So how do you start this word game business?

If your child is a baby, he'll just love listening to you read to him.

Just a gentle word of caution here: this is not meant to be a boring, learning exercise or something mum or dad gets all anxious and uptight about. It's meant to be fun!

If your child doesn’t comment on the way these words sound, you can point them out to him.

A good way to do this is to simply emphasize the words as you read them, like this:

Read these lines to yourself a few times to get the rhythm of them. 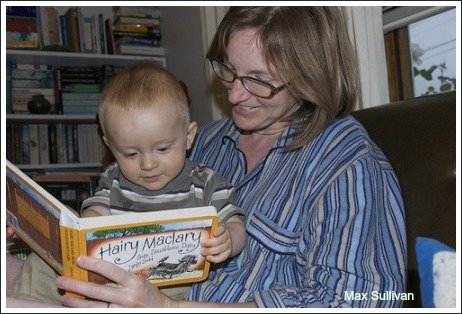 Once your child is about three, you can have loads of fun together making up nonsense words and changing the sounds around in familiar words to form other words.

Using a favourite nursery rhyme or nonsense poem as a starting point can be fun, although it's not compulsory.

Start by talking to your child about how ...

Other Ideas For Word Games For Kids

By the age of three or four, kids understand and appreciate humour so be as silly as you like. In fact, playing with silly words is the whole point!

For example, if your child's name is James, start by playing with the 'j' sound.

If your child responds with words like 'jit' or 'jod' or 'giraffe' don't correct him. Again, it's the sound that's important and he's got that right so praise him, laugh and encourage him. It's a game and it needs to be fun!

The great thing about simple word games for kids like these is that they can be played anywhere.

When my children were younger I found this was a great way of keeping them happy if we ever had to wait anywhere – at a supermarket, in the car or while we were waiting to pick up one of their siblings.

If you don't have a book handy, look for a sign or a notice with large-ish words and get inventive! For example, if your daughter's name is 'Annabel', find an A somewhere and point it out to her, saying something like:

'Look - there's an A sound! Now, who do we know whose name starts with an A sound?'

Note: again, remember to call this an 'a sound', as in the word apple.

If you'd like other ideas for word games to play with your child, there are some great ideas here.

For older children (from about four on), "I Spy" is a great game to encourage phonological awareness and word skills in general.

This is a great game to play in the car, especially on longer trips.

So, you're reading to your child and playing games with him but how do you know his phonological awareness is developing?