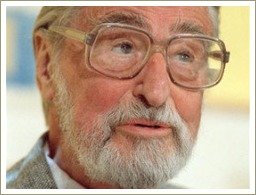 On this page you'll find a comprehensive Dr Seuss biography, a biography of Theodor Seuss Geisel, one of the world’s best-known and most-loved children’s authors.

This page is quite long so, if you'd like to read a shorter biography of Dr Seuss, you may like to go to my 10 Fun Facts About Dr Seuss.

Theodor Seuss Geisel (‘Ted’ to his friends) was born on 2 March 1904 in Springfield, Massachusetts to Theodor Robert Geisel and Henrietta (Seuss) Geisel.

Ted’s father, Theodor, was the son of German immigrant parents and managed the family brewery in Springfield. His mother, Henrietta Seuss Geisel, often soothed her children to sleep by ‘chanting’ rhymes she remembered from her childhood.

Ted had one sister, Marnie, and the two seemed to have had a happy, comfortable childhood.

Young Ted Geisel went to Springfield's Classical High School and then to Dartmouth College where he worked on the college’s humour magazine the 'Jack-O-Lantern' and became its editor-in-chief. 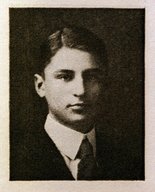 While he was at Dartmouth, Geisel was caught drinking gin with friends in his room, violating the Prohibition laws of the 1920s. As a result, he was forced to resign from all extracurricular activities, including the Jack-O-Lantern. To continue working on the Jack-O-Lantern, Geisel began signing his work with the pen-name ‘Seuss’ which was both his mother’s maiden name and his own middle name.  His first work signed as Dr Seuss appeared after he graduated.

After Dartmouth, Ted went to Oxford University in England to study philosophy and English literature. This was at the suggestion of his father, who wanted him to be a college professor. At Oxford Geisel met Helen Palmer, a fellow student who later became his first wife, however his academic studies bored him and he decided to tour Europe instead.

After returning to the US, Ted pursued a career as a cartoonist, after which he spent 15 years creating advertising campaigns for Standard Oil.

As World War II approached, Ted began contributing weekly political cartoons to PM magazine, a liberal publication. He went on to serve with Frank Capra's Signal Corps (US Army) making training movies and it was here that he was introduced to the art of animation and developed a series of animated training films.

While he continued to contribute to a variety of magazines, Viking Press offered him a contract to illustrate a collection of children's sayings called Boners. The book was not a commercial success but the illustrations received great reviews, providing Ted with his first ‘big break’ into children's literature.

The first book that was both written and illustrated by Theodor Seuss Geisel was And to Think That I Saw It on Mulberry Street. The book was rejected 27 times before being published by Vanguard Press in 1937.

After the war, Geisel and his wife moved to California and Ted returned to writing children's books. He wrote many Dr Seuss books during this time, including If I Ran the Zoo in 1950.

Then, in May 1954, Life magazine published a report on illiteracy among school children which concluded that children were not learning to read because the books they were being asked to read were boring. 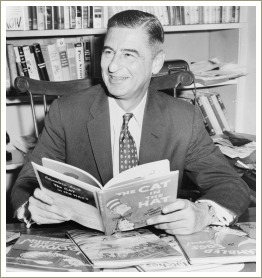 William Ellsworth Spaulding, a textbook editor at Houghton Mifflin, took this onboard and compiled a list of 348 words he felt were important for first-graders to recognize. He asked Geisel to cut the list to 250 words and to write a book using only those words. Spaulding challenged Geisel to write a book ‘children can't put down.’

Nine months later, Geisel, using 236 of the words given to him, completed The Cat in the Hat.

The book was an instant success and is still very popular with children today.Part of the appeal of The Cat in the Hat when it was first published was that it retained the drawing style, verse rhythms and all the imaginative power of Geisel's earlier works but, because of its simplified vocabulary, could be read by beginning readers.

Theodor Seuss Geisel went on to write many other children's books using his pseudonym of Dr Seuss. Some were written in his new simplified-vocabulary manner and were sold as Beginner Books while some were written in his older, more elaborate style. These included favourites like Green Eggs and Ham (in 1960) and The Lorax (in 1971).

On 23 October 23 1967, after a long struggle with illnesses including cancer, as well as emotional pain over her husband's affair with Audrey Stone Dimond, Ted's wife, Helen, committed suicide. On 21 June 1968, he married Audrey. 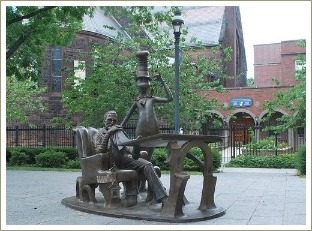 Despite being married twice and spending much of his adult life writing books for children, Geisel had no children of his own. He was often quoted as saying, when asked about this, ‘You have 'em; I'll entertain 'em.’

Ted Geisel died on 24 September 1991. He leaves a legacy of 44 children's books which he both wrote and illustrated and which have been translated into more than 15 languages and sold over 200 million copies around the world.