These Winnie-the-Pooh quotes come from the famous books for children written by English author A A Milne. 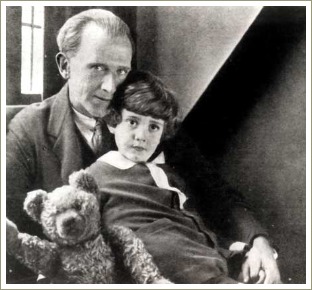 A A Milne with Christopher Robin

He wrote stories, plays and poetry for children and adults but is most famous for the four books he wrote for children about his son, Christopher Robin, and Christopher's collection of toys.

The model for Winnie-the-Pooh was actually a bear called Edward which Christopher Robin received as a first-birthday gift.

As a child, Christopher carried the bear everywhere with him which gave his father the inspiration for the Winnie-the-Pooh character.

A A Milne had a fantastic way with language and his poems and stories contain some lovely thoughts expressed in unusual and often thought-provoking ways.

The four books from which these quotes are taken are the two Winnie-the-Pooh books and two books of poetry for children:

You may notice that this page has fewer quotes than most of the other Winnie-the-Pooh quotes pages on the web.

This is because I've only included the quotes I like exactly as they appear in the books.

This is inspired by A A Milne's books and includes some of the events and words which appear in the four books Milne wrote massaged into words of wisdom to fit the idea of an instruction book.

The book's fun but it wasn't written by A A Milne and the words are not the ones that appear in the original books so I haven't included them on this page.

" ... so that's why he likes having it told to him again. Because then it's a real story and not just a remembering."
- Christopher Robin in Winnie-the-Pooh, page 20


"I did know once, only I've sort of forgotten."
- Christopher Robin in Winnie-the-Pooh, page 122


" ... my spelling is Wobbly. It's good spelling but it Wobbles, and the letters get in the wrong places."
- Pooh to Owl in Winnie-the-Pooh, page 81


"Poetry and Hums aren't things which you get, they're things which get you. And all you can do is go where they can find you."
- from


" ... he thought that if he stood on the bottom rail of the bridge, and leant over, and watched the river slipping slowly away beneath him, then he would suddenly know everything that there was to be known ..."
- from The House at Pooh Corner, page 102


"They're funny things, Accidents. You never have them till you're having them."
- from The House at Pooh Corner, page 67


"Well," said Pooh, "what I like best - " and then he had to stop and think. Because although Eating Honey was a very good thing to do, there was a moment just before you began to eat it which was better than when you were, but he didn't know what it was called."
-from The House at Pooh Corner


"You've never been to see any of us. You just stay here in this one corner of the Forest waiting for the others to come to you. Why don't you go tothem sometimes?"
- Rabbit to Eeyore in The House at Pooh Corner, page 147

"When you are a Bear of Very Little Brain, and Think of Things, you find sometimes that a Thing which seemed very Thingish inside you is quite different when it gets out into the open and has other people looking at it."
- from The House at Pooh Corner, page 99


"Pooh knew what he meant, but, being a Bear of Very Little Brain, couldn't think of the words."
- from The House at Pooh Corner, page 43


"I have been Foolish and Deluded."
- Pooh to Christopher Robin in Winnie-the-Pooh, page 43


"Nobody can be uncheered with a balloon."
- Pooh to Piglet in Winnie-the-Pooh, page 79 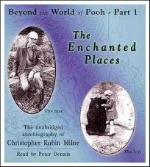 Christopher Robin Milne died in 1996. He and his wife had one child, Clare.

Christopher's autobiography covers several books but the most fascinating one is the first one which covers his childhood.

The book's called The Enchanted Places and, although it's out of print, it is available as an audio book from the Book Depository.

It's a fascinating story so it's worth keeping an eye out for a second-hand copy of the book. I have a 1973 copy which I bought on ebay.