You are here:  home / classic fairy tales / Puss in Boots

Master Cat, a story better known as Puss in Boots, was originally a French fairy tale. It was first published in 1697 in a book written by a French writer names Charles Perrault. 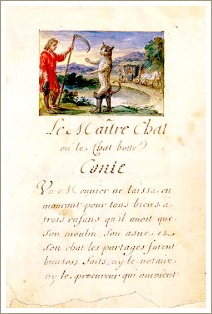 Interestingly, the frontispiece (the first page inside the front cover) of this book shows an illustration of an old woman spinning and telling stories with the words Contes de ma Mere l'Oye (Tales of My Mother the Goose). This is the earliest known reference in print to Mother Goose and seems to indicate that the name Mother Goose was originally connected with stories, rather than with the rhymes and songs we know today as Mother Goose nursery rhymes.

About Puss in Boots

Although he was the first to publish the story, Charles Perrault didn't actually write Puss in Boots himself. Like the other stories in his book, the tale was already well-known in Europe as part of an oral tradition of story-telling going back hundreds of years.

Perrault's Master Cat is probably the most famous example in Western folklore of what is known as a trickster cat but there are many examples of similar stories in Hindu folklore and in the Italian tradition of oral story-telling.

Perrault may not have been the original author of the story of Puss in Boots but he was the first to write it down and he did so with wit and style. His book was an immediate success, was quickly translated into English and, as we know, the English-speaking world came to love the stories as much as the French did!

The story on this page is the original tale of Puss in Boots, translated into English from the story written in French by Charles Perrault in 1697.

Master Cat, or, Puss in Boots

There was a miller whose only inheritance to his three sons was his mill, his donkey, and his cat. The division was soon made. They hired neither a clerk nor an attorney, for they would have eaten up all the poor patrimony. The eldest took the mill, the second the donkey, and the youngest nothing but the cat.

The poor young fellow was quite comfortless for having received so little. "My brothers," said he, "may make a handsome living by joining their shares together; but, for my part, after I have eaten up my cat, and made myself a muff from his skin, I must then die of hunger."

The cat, who heard all this, but pretended otherwise, said to him with a grave and serious air, "Do not be so concerned, my good master. If you will but give me a bag, and have a pair of boots made for me, that I may scamper through the dirt and the brambles, then you shall see that you are not so poorly off with me as you imagine."

The cat's master did not build very much upon what he said. However, he had often seen him play a great many cunning tricks to catch rats and mice, such as hanging by his heels, or hiding himself in the meal, and pretending to be dead; so he did take some hope that he might give him some help in his miserable condition. 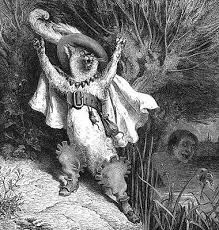 An 1800s illustration of Puss in Boots by Gustav Dore

After receiving what he had asked for, the cat gallantly pulled on the boots and slung the bag about his neck. Holding its drawstrings in his forepaws, he went to a place where there was a great abundance of rabbits. He put some bran and greens into his bag, then stretched himself out as if he were dead. He thus waited for some young rabbits, not yet acquainted with the deceits of the world, to come and look into his bag.

He had scarcely lain down before he had what he wanted. A rash and foolish young rabbit jumped into his bag, and the master cat, immediately closed the strings, then took and killed him without pity.

Proud of his prey, he went with it to the palace, and asked to speak with his majesty. He was shown upstairs into the king's apartment, and, making a low bow, said to him, "Sir, I have brought you a rabbit from my noble lord, the Master of Carabas" (for that was the title which the cat was pleased to give his master).

"Tell your master," said the king, "that I thank him, and that I am very pleased with his gift."

Another time he went and hid himself in a grain field. He again held his bag open, and when a brace of partridges ran into it, he drew the strings, and caught them both. He presented these to the king, as he had done before with the rabbit. The king, in like manner, received the partridges with great pleasure, and gave him a tip. The cat continued, from time to time for two or three months, to take game to his majesty from his master.

One day, when he knew for certain that the king would be taking a drive along the riverside with his daughter, the most beautiful princess in the world, he said to his master, "If you will follow my advice your fortune is made. All you must do is to go and bathe yourself in the river at the place I show you, then leave the rest to me."

At this noise the king put his head out of the coach window, and, finding it was the cat who had so often brought him such good game, he commanded his guards to run immediately to the assistance of his lordship the Marquis of Carabas. While they were drawing the poor Marquis out of the river, the cat came up to the coach and told the king that, while his master was bathing, some rogues had come by and stolen his clothes, even though he had cried out, "Thieves! Thieves!" several times, as loud as he could. In truth, the cunning cat had hidden the clothes under a large stone.

The king immediately commanded the officers of his wardrobe to run and fetch one of his best suits for the Lord Marquis of Carabas.

The king received him very courteously. And, because the king's fine clothes gave him a striking appearance (for he was very handsome and well proportioned), the king's daughter took a secret inclination to him. The Marquis of Carabas had only to cast two or three respectful and somewhat tender glances at her but she fell head over heels in love with him. The king asked him to enter the coach and join them on their drive.

The cat, quite overjoyed to see how his project was succeeding, ran on ahead. Meeting some countrymen who were mowing a meadow, he said to them, "My good fellows, if you do not tell the king that the meadow you are mowing belongs to my Lord Marquis of Carabas, you shall be chopped up like mincemeat."

The king did not fail to ask the mowers whose meadow it was that they were mowing.

"It belongs to my Lord Marquis of Carabas," they answered altogether, for the cat's threats had frightened them.

"You see, sir," said the Marquis, "this is a meadow which never fails to yield a plentiful harvest every year."

The master cat, still running on ahead, met with some reapers, and said to them, "My good fellows, if you do not tell the king that all this grain belongs to the Marquis of Carabas, you shall be chopped up like mincemeat."

The king, who passed by a moment later, asked them whose grain it was that they were reaping.

The master cat came at last to a stately castle, the lord of which was an ogre, the richest that had ever been known. All the lands which the king had just passed by belonged to this castle. The cat, who had taken care to inform himself who this ogre was and what he could do, asked to speak with him, saying he could not pass so near his castle without having the honor of paying his respects to him.

The ogre received him as civilly as an ogre could do, and invited him to sit down. "I have heard," said the cat, "that you are able to change yourself into any kind of creature that you have a mind to. You can, for example, transform yourself into a lion, an elephant, or the like."

"That is true," answered the ogre very briskly; "and to convince you, I shall now become a lion."

The cat was so terrified at the sight of a lion so near him that he leaped onto the roof, which caused him even more difficulty, because his boots were of no use at all to him in walking on the tiles. However, the ogre resumed his natural form, and the cat came down, saying that he had been very frightened indeed.

"I have further been told," said the cat, "that you can also transform yourself into the smallest of animals, for example, a rat or a mouse. But I can scarcely believe that. I must admit to you that I think that that would be quite impossible."

"Impossible!" cried the ogre. "You shall see!"

He immediately changed himself into a mouse and began to run about the floor. As soon as the cat saw this, he fell upon him and ate him up.

Meanwhile the king, who saw this fine castle of the ogre's as he passed, decided to go inside. The cat, who heard the noise of his majesty's coach running over the drawbridge, ran out and said to the king, "Your majesty is welcome to this castle of my Lord Marquis of Carabas."

"What! my Lord Marquis," cried the king, "and does this castle also belong to you? There can be nothing finer than this court and all the stately buildings which surround it. Let us go inside, if you don't mind."

The marquis gave his hand to the princess, and followed the king, who went first. They passed into a spacious hall, where they found a magnificent feast, which the ogre had prepared for his friends, who were coming to visit him that very day, but dared not to enter, knowing the king was there.

His majesty was perfectly charmed with the good qualities of my Lord Marquis of Carabas, as was his daughter, who had fallen violently in love with him, and, seeing the vast estate he possessed, said to him, after having drunk five or six glasses, "It will be your own fault, my Lord Marquis, if you do not become my son-in-law."

The marquis, making several low bows, accepted the honor which his majesty conferred upon him, and forthwith, that very same day, married the princess.

The cat became a great lord, and never again ran after mice, except for entertainment.

Moral:
There is great advantage in receiving a large inheritance, but diligence and ingenuity are worth more than wealth acquired from others.

Another moral:
If a miller's son can win the heart of a princess in so short a time, causing her to gaze at him with lovelorn eyes, it must be due to his clothes, his appearance, and his youth. These things do play a role in matters of the heart. 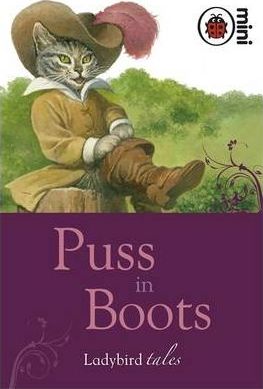 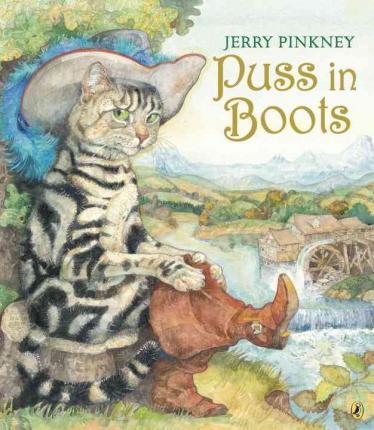 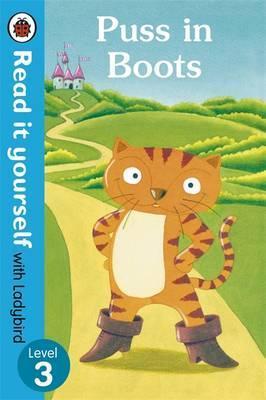 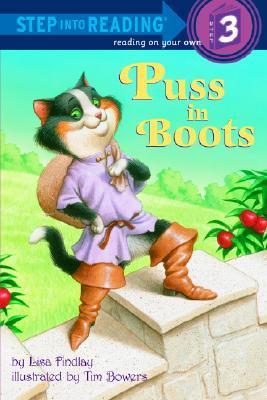