Mary Pope Osborne is the American author of the Magic Tree House books, a series of brilliant books for kids aged from six to nine years. 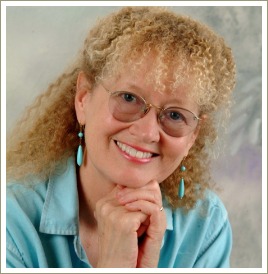 The Magic Tree House series has sold over 7o millions copies around the world since the first book, Valley of the Dinosaurs, was released in 1992.

There are now a total of 48 books in the Magic Tree House series: the 28 original books plus 20 books in the Merlin Missions series which was written for slightly older children.

As a primary school teacher, I find that these books perfectly suit Year 2 students who are usually seven or eight years of age and becoming independent readers. There are enough pictures to provide interest and to help children with the text and the chapters are short-ish so they're not too daunting for young readers.

Both my own children and now my students also learn a lot from these books in terms of  their content because each story introduces kids to a different period in history and to some of the people who lived then. This wasn't the reason I introduced my children to the books way back in the 1990s but it was a huge bonus for me because I really love history and was very keen to pass this love on to them.

Mary Pope was born in Fort Sill, Oklahoma, in the United States on 20 May 1949. She has a twin brother, an older sister and a younger brother and has always enjoyed a close relationship with her family. Mary's father was a Colonel in the US army and until she was fifteen her family moved around the US to various army bases where her father was stationed. When he retired, the family settled in North Carolina.

As a teenager, Mary became involved in her local community theatre, spending many happy hours after school acting and working backstage. She went on to study drama at the University of North Carolina at Chapel Hill where she studied mythology and comparative religion. These two areas of interest became her great passions and many years later would provide the inspiration for The Magic Tree House books.

After graduating from college in the early 1970s, she travelled extensively, on one occasion travelling with a group through sixteen Asian countries, including Iraq, Iran, Afghanistan, Pakistan, India and Nepal. Returning to the US, Mary worked at a variety of jobs before meeting Will Osborne, an actor, in New York City. They married in 1976.

Mary Pope Osborne was a published author for ten years before the first Magic Tree House book was published in 1992.

Her first book, called Run, Run, As Fast As You Can, had been published in 1982 by Random House and several other books followed, mostly books for young people. Then one day, her editor at Random House suggested to Mary that she write a series for children. 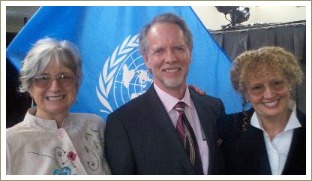 Natalie, Will and Mary

Mary liked the idea of writing a time travel series and spent a year planning the books, although she originally thought of them as a temporary diversion from her other writing. But how to make the children travel back in time?

While Mary was trying to work this aspect of her story out, she went for a walk and happened to come across an old children's tree house. And so the idea for The Magic Tree House was born.

Since the first Magic Tree House book, Valley of the Dinosaurs, was published in 1992, the 48 books in the series have together sold more than 100 million copies around the world.

has also collaborated with her husband, Will Osborne, and her sister, Natalie Pope Boyce, on a series of related, non-fiction books called Fact Trackers.

The Magic Tree House Boxed Sets:
4 stories in each book! 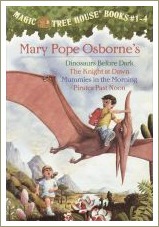 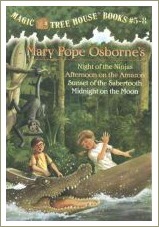 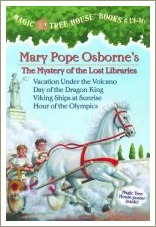