If — by Rudyard Kipling is a poem written by the English author in 1895. It was first published in Kipling's 1910 collection of short stories and poems called Rewards and Fairies. The poem is quite inspirational so it's been widely quoted over the years and is still very popular today.

The poem's most famous line is the one that's inscribed on the wall above the players' entrance to the Centre Court at Wimbledon: 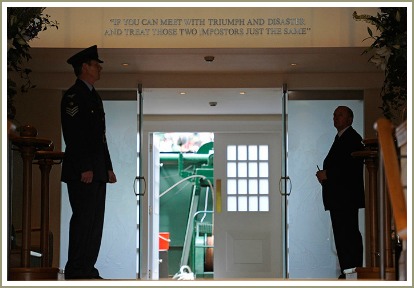 The players' entrance to the Centre Court at Wimbledon

About If - by Rudyard Kipling

If - is written as four eight-line stanzas. It was written in 1909 as advice from Kipling to his son and evokes the virtues of a 'stiff upper lip' and stoicism in the face of difficulties. These qualities have for a long time been considered very British, especially during the period of the Raj, when the English ruled India. At one stage, copies of the poem were printed, framed and fixed to the wall in front of the study desks in the officer cadets' cabins at the National Defence Academy in Pune in India.

The poem has inspired the nation for a century and is often voted 'Britain's Favourite Poem', most recently in 2009.

Kipling said in his autobiography that the poem was inspired by Dr Leander Starr Jameson. This was the fellow who, in 1895, led a raid by British forces against the Boers in South Africa. The British were defeated and this increased the tensions that ended up leading to the Second Boer War. Weirdly, the British press portrayed Jameson as a hero in the middle of the disaster and the actual defeat as a British victory.

T S Eliot apparently said at one stage that the poem was not a great poem, describing it instead as 'great verse'. Orwell is said to have called it a 'good bad' poem.

The poem has at various times been called 'jingoistic nonsense' and, on the other hand,'unforgettable' (in a good way).

What do you think?

If - by Rudyard Kipling

If you can keep your head when all about you
Are losing theirs and blaming it on you;
If you can trust yourself when all men doubt you,
But make allowance for their doubting too:
If you can wait and not be tired by waiting,
Or, being lied about, don't deal in lies,
Or being hated don't give way to hating,
And yet don't look too good, nor talk too wise;

If you can dream - and not make dreams your master;
If you can think - and not make thoughts your aim,
If you can meet with Triumph and Disaster
And treat those two impostors just the same:.
If you can bear to hear the truth you've spoken
Twisted by knaves to make a trap for fools,
Or watch the things you gave your life to, broken,
And stoop and build'em up with worn-out tools;

If you can make one heap of all your winnings
And risk it on one turn of pitch-and-toss,
And lose, and start again at your beginnings,
And never breathe a word about your loss:
If you can force your heart and nerve and sinew
To serve your turn long after they are gone,
And so hold on when there is nothing in you
Except the Will which says to them: 'Hold on!'

If you can talk with crowds and keep your virtue,
Or walk with Kings - nor lose the common touch,
If neither foes nor loving friends can hurt you,
If all men count with you, but none too much:
If you can fill the unforgiving minute
With sixty seconds' worth of distance run,
Yours is the Earth and everything that's in it,
And - which is more - you'll be a Man, my son.