Did you know that there's a Dr Seuss baby book written especially for reading to babies before they're born? If you didn't, you're not alone: it was new discovery for me too! 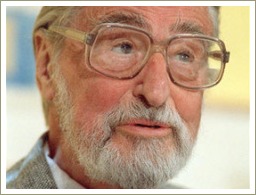 Dr Seuss, whose real name was Theodor Seuss Geisel, was fascinated by research that was being done in the 1970s and 1980s into the development of babies while they were still in the womb. He was particularly interested in the idea that babies could hear sounds and might actually be able to respond to their parents' voices.

His interest in this idea increased when he came across an article in the 1980s about researchers who had asked mums- and dads-to-be to read aloud to their babies during their pregnancies.

Ted and his wife, Audrey, were delighted to learn that the book the parents had been asked to read was The Cat in the Hat! The researchers found that the baby was more active than usual during the reading and gradually settled down afterwards.

The really cool thing about this was that the study showed that this response to the reading aloud session continued after birth. From this, the researchers concluded that the babies remembered that they'd heard the story before - when it was read to them when they were still in the womb.

The Dr Seuss Book for Babies

Oh, Baby, the Places You'll Go! is a very cute small-format, hard-cover book which makes a lovely gift for a mum or dad-to-be, perhaps when they announce their pregnancy. In fact, I recently gave a copy of this gorgeous Dr Seuss baby book to my sister when she was pregnant with her second child. It also makes a very special baby shower gift. 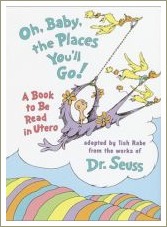 Oh, The Places You'll Go! was the last book Ted Geisel wrote before his death on 24 September 1991. He wrote it at his home in La Jolla, California in early 1989 and it was released by the publisher, Random House, on 22 January 1990. At the time, Ted was suffering from throat cancer. He was 85 years old and in quite a lot of pain but he continued to work in his home studio from 10am until 6pm every day.

In their wonderful biography, Dr Seuss & Mr Geisel, Ted's friends Judith and Neil Morgan write that Ted knew the end was not far off:

"There was never any doubt that Ted considered Oh, the Places You'll Go! his farewell salute, his last parade, Mulberry Street gone worldwide." 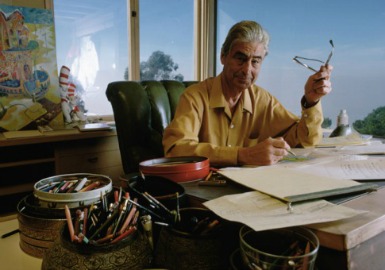 Ted Geisel in his studio towards the end of his life

The idea for the book began with Ted gathering up his favourite unpublished sketches and images and pinning them to the wall in his studio. He wrestled for a while with various ideas before the images gradually evolved into the idea for Oh, the Places You'll Go!

Cathy Goldsmith, an art director at Random House, had worked with Ted for ten years and flew out from New York to help with the final illustrations and layouts for the book. She stayed in Audrey and Ted's guest room so she could work with Ted whenever he felt well enough and, when it was finished, Ted gave her the book to take back to New York.

The fact that Ted Gave the book to Cathy to deliver to his publishers was significant and very sad for both of them because Ted's normal way of working was to hand-deliver each new manuscript to Random House in New York.

Oh, the Places You'll Go! was an instant success. It went straight onto the New York Times bestseller list and remained there for more than two years, selling 1.5 million copies during that time.

About Oh, The Places You'll Go!

The book's been a popular graduation gift for young people over the years but I think it makes a great gift for any child or young adult at any time in their lives.