You are here:  home / Banjo Paterson / Clancy of the Overflow

Clancy Of The Overflow

Clancy of the Overflow was one of the first poems I remember learning at primary school. I was only about nine at the time but something about the flow of the words and the picture they conjured up spoke to me and I've loved it ever since.

Clancy of the Overflow is considered one of the greatest of the Australian bush poems, a genre of poetry made famous by the author, Andrew Barton "Banjo" Paterson. The poems of Banjo Paterson are part of the Australian culture and are still taught in schools today. 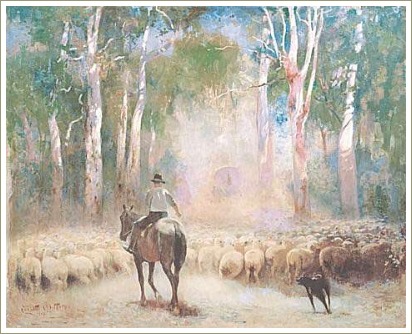 About Clancy of the Overflow

Clancy of the Overflow was inspired by an experience Banjo Paterson had while he was working as a lawyer.

He was asked to write to a man named Thomas Gerald Clancy to ask for a payment that had not been received. Banjo sent the letter to 'The Overflow' and received the reply: 'Clancy's gone to Queensland droving and we don't know where he are.'

The letter looked as if it had been written with a thumbnail dipped in tar, which it probably had. In the old days, hot tar was kept in the shearing shed and dabbed on any cuts the shearer gave the sheep. The tar would harden almost immediately, seal the cut and stop the bleeding.

"The Overflow" mentioned in the poem was actually a sheep station which was located about 32 kilometres south east of the town of Nymagee. Nymagee itself is almost exactly in the centre of New South Wales. It's about 600 kilometres northwest of Sydney and today has a population of about 100 people.

The poem was first published in The Bulletin, an Australian news magazine, on 21 December 1889.

Clancy of the Overflow has been set to music and recorded a number of times over the years.

My favourite is this version. which I've only recently found on youTube.

Clancy of the Overflow is sometimes criticised for presenting an overly romantic view of droving and of country life in general. In reality, of course, life in the country was very tough in the 1880s and the drover's life was especially harsh and lonely. For all that, the poem touched something in people, even back in 1889, and it was immediately popular.

Funny how it was written so long ago yet the feelings Paterson describes are still so relevant today.

Clancy of the Overflow

I had written him a letter which I had, for want of better
Knowledge, sent to where I met him down the Lachlan, years ago,
He was shearing when I knew him, so I sent the letter to him,
Just 'on spec', addressed as follows, 'Clancy, of The Overflow'.

And an answer came directed in a writing unexpected,
(And I think the same was written with a thumb-nail dipped in tar)
'Twas his shearing mate who wrote it, and verbatim I will quote it:
'Clancy's gone to Queensland droving, and we don't know where he are.'

In my wild erratic fancy visions come to me of Clancy
Gone a-droving 'down the Cooper' where the Western drovers go;
As the stock are slowly stringing, Clancy rides behind them singing,
For the drover's life has pleasures that the townsfolk never know.

And the bush hath friends to meet him, and their kindly voices greet him
In the murmur of the breezes and the river on its bars,
And he sees the vision splendid of the sunlit plains extended,
And at night the wond'rous glory of the everlasting stars.

I am sitting in my dingy little office, where a stingy
Ray of sunlight struggles feebly down between the houses tall,
And the foetid air and gritty of the dusty, dirty city
Through the open window floating, spreads its foulness over all.

And in place of lowing cattle, I can hear the fiendish rattle
Of the tramways and the buses making hurry down the street,
And the language uninviting of the gutter children fighting,
Comes fitfully and faintly through the ceaseless tramp of feet.

And the hurrying people daunt me, and their pallid faces haunt me
As they shoulder one another in their rush and nervous haste,
With their eager eyes and greedy, and their stunted forms and weedy,
For townsfolk have no time to grow, they have no time to waste.

And I somehow rather fancy that I'd like to change with Clancy,
Like to take a turn at droving where the seasons come and go,
While he faced the round eternal of the cash-book and the journal —
But I doubt he'd suit the office, Clancy, of 'The Overflow'.