On this page you’ll find my list of the best books for teen girls.

If the teen girl in your life enjoys reading, I can pretty much guarantee that these books will hits. They're are really well-written books, with interesting, complex characters and strong plots which manage to avoid many of the done-to-death story-lines often seen in books for teen girls. 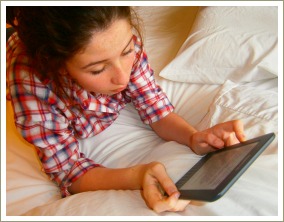 My daughter and her friends – a tough audience - have read the books reviewed here and have pronounced them ‘awesome’. I’ve read them all too and have really enjoyed them.

I should add that, although I've listed these books as being great for teen girls, most of them will be enjoyed by boys too. My twin sons read and enjoyed many of them.

Even if the teen girl in your life is not a big reader, these books are pretty much guaranteed to get her interested. A great approach to try if you're keen to encourage your daughter to read is to get hold of an ipod, a Kindle or some other kind of e-reader and download a few books. Teenagers are sometimes more open to reading if they can do it on some kind of electronic device.

It's not the first thing you might think of but audio books can also be worth a try with teens. Download them onto an ipod or mobile 'phone and away you go! This is a great idea for travelling.

1. The Declaration
This book is set in the future at a time when humans have discovered a drug that allows them to live indefinitely. But when no-one ever dies, population control becomes a big issue so Longevity is only available to those who sign The Declaration agreeing not to have children. The outcome of this is that children are rare and the few who are born, both ‘surpluses’ and ‘legals’, are hated and feared so are kept hidden. Many are captured by the authorities and treated as slaves. Anna is a surplus who lives a horrible life of work and humiliation at a Surplus Hall until one day Peter arrives at the Hall ….

This book is targeted at teen-aged girls but boys will find it engrossing as well. It’s quite dark and the themes are fairly mature and thought-provoking. My daughter read it for school last year in Year 7 and I imagine they had some interesting discussions in class. The book’s exceptionally well-written and appeals to adults as well as younger readers.

There are two sequels, The Resistance and The Legacy. Both are great.

2. Looking for Alibrandi
For as long as Josie Alibrandi can remember, it's just been her, her mum and her grandmother. Now it's her final year at a wealthy Catholic girls' school and she’s caught between the old-world values of her Italian nonna, the no-nonsense wisdom of her mother and the boys who continue to mystify her. She falls in love, discovers the secrets of her family's past and meets her father for the first time.

Melina Marchetta was a high school teacher before she decided to write full-time so Josie’s world is one which Melina knows very well.

3. Saving Francesca
Francesca is at the beginning of her school term in Year 11 at an all-boys' school that has just started accepting girls. She misses her old friends, and, to make things worse, her mother has had a breakdown and can barely move from her bed. But Francesca had not counted on the fierce loyalty of her new friends, or on falling in love ...

Melina Marchetta has the ability to really get inside her character’s head and, as a result, Francesca is a likeable and very real person, flaws and all.

4. Tomorrow, When the War Began
This series of books appeals equally to boys and girls but definitely deserves a place in any list of great books for teen girls. Ellie and her friends spend a week camping in the bush - a group of teenagers enjoying the school holidays. When they return to town, they find their homes deserted and their animals dead or dying. Gradually they discover that the country has been taken over by foreign invaders and they retreat back into the bush to work out what to do. Do they surrender or fight? Their world has changed forever and their lives will never be the same.

This book is the first in a series and, as well as being an exciting story, asks some challenging questions. It’s recently been made into a movie but the book’s definitely better!

You can see the complete list of books in this series here.

5. Boys, Bears and a Serious Pair of Hiking Boots
The main character of this story, 17-year-old Jenna, lives in New Jersey but is really into environmental activism. So when her Mum arranges for them to spend the summer with her grandma in Florida condo, Jenna pleads instead to visit her hippie godmother, Susie, in rural Canada. Jenna’s looking forward to exploring the local environment but things don’t turn out quite as she expects. There’s the slightly hostile wildlife, Susie’s sullen Goth stepdaughter and a hot but hostile boy named Reeve.

This book started out a bit slowly but picked up so it’s worth persevering with.

6. Beautiful Dead: Jonas (Book 1)
This series of books for teen girls is very popular with the 13+ set. I haven't finished reading this one but my daughter's read the whole series so I asked her to write a review. Here's what she wrote:

'This series follows Darina, a student at Ellerton High who is in mourning over the death of her boyfriend Pheonix in a gang fight. Pheonix's death was the fourth in a string of four mysterious deaths at Ellerton, all of the victims friends of Darina's.

When Darina begins to see Pheonix around her she begins to question her sanity but when she follows him to an old barn out of town she discovers what she's seeing is no trick of her mind. Jonas, Arizona, Summer and Pheonix have all been given 12 months as spirits in the world to solve the mystery surrounding their deaths, however they need someone to be their link to the living. Darina.

In each book Darina battles time to solve each mystery before they are doomed to a life of limbo. These books are slightly dark but have a unique take on a common storyline. You find yourself caring for each character and in constant suspense until the very end. An amazing book, up there with Twilight and Harry Potter for sure.'

7. Twilight
No list of books for teen girls would be complete without this series! Most people have a vague idea of the story line here. Seventeen-year-old Bella Swan moves to a small town in the US and meets a seriously gorgeous but mysterious guy who turns out to be a vampire. This is unrequited-teenage-love-meets-the-supernatural with enough danger and mystery to make it adult.

This book is really aimed at 14-17 year old girls but has also been popular with younger girls. Be careful if your daughter, like mine is keen to read it at a young age. There are some quite dark bits - you may like to check it out first yourself before you let her read it. To be honest, I was also concerned about some of the messages I think young girls take from this book.

It's a fine line between mirroring issues that concern teen-aged girls (like the importance of having a boyfriend and surrendering yourself completely to a relationship) and reinforcing the importance of these issues. If your daughter reads these books, I think it's important to discuss these issues with her so that she thinks about them, rather than just absorbing them. There is enough darkness and teenage angst in Twilight to interest some boys too. One of my sons read the series, one showed no interest at all.

The other books is the series are: New Moon, Eclipse and Breaking Dawn.

8. Harry Potter and the Deathly Hallows
If you're looking for books for teen girls, don't forget the Harry Potter series. While the first two books - The Philosopher's Stone and The Chamber of Secrets - are pitched at a younger readership, the books become progressively more complex, darker and more challenging. In fact, the seventh and final book in the series, Harry Potter and the Deathly Hallows is probably not suitable for readers under about thirteen.

You should have no trouble finding copies of any of the Harry Potter books in libraries or in second-hand books shops. You could also ask to borrow them from family and friends with older children. Most people will have a collection of the books and people are almost always happy to lend them. And if your teen does want to read (or re-read) the whole series, there are editions with more adult-looking covers so they're not embarrassed to be seen reading what they probably think of as kids' books. Check out the links to see these covers for the rest of the books in the series.

Check out the first six books in the series here.

9. Pretty Little Liars
This book's an interesting one because it mixes the usual teen issues with a mystery which is woven through the story. A group of teen girls - Alison, Aria, Emily, Hanna and Spencer - are close in the first year of high school but grow apart after Ali disappears. Ali was the cool, beautiful one who knew all their secrets. The girls are getting on with their lives when each starts to receive mysterious messages signed 'A' about things only Ali knew ...

Girls from 13 to about 17 will enjoy this book which is the first in a series.

The other books are: Flawless, Perfect, Unbelievable, Wicked, Killer, Heartless and Wanted. 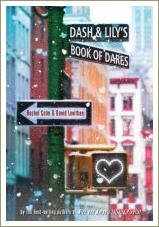 10. Dash & Lily's Book of Dares
This 2010 release is one of the best books for teen girls around. At it's heart, this is a love story but it's not an obvious love story and it comes with a twist. Dash and Lily are both 16 and live in New York. They don't know one another but they're both, for different reasons, spending Christmas and New Year home alone. In fact, Lily's brother is at home but he's in love and totally pre-occupied so he devises a plan to keep Lily busy during the holidays. The plan is a notebook filled with dares which Lily leaves on a shelf in her favourite bookshop, just waiting for the right person to come along and accept the dares.

Many teen boys would also enjoy this book. It's not obviously a girl's book and Dash is a likeable, slightly unusual character.

11. The Fault in Our Stars
My 14-year-old daughter put me on to this book and it's a real winner. The story is narrated by Hazel, a sixteen-year-old cancer patient who's forced by her parents to attend a support group where she meets and falls in love with Augustus, a seventeen-year-old amputee who is in remission.

My daughter and I agree that this is a brilliantly-written book with great characters (especially Augustus!) that you really come to care about. I like that the plot is a bit unusual and the ending is certainly a surprise.