You are here:  home / Banjo Paterson / A Bush Christening

I first heard Banjo Paterson's poem A Bush Christening many years ago when my mother read it to my sisters and I. Of all the Australian poetry around, it's still one of my favourite poems. 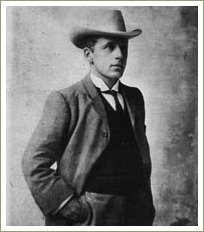 My mother has spent most of her adult life in Sydney but she grew up in Goulburn in New South Wales in an Irish Catholic family. Some of her ancestors were convicts who came here in the 1830s and made a new life for themselves in the harsh conditions of the Australian bush.

I guess maybe Mum and I both love this poem because, apart from the fact that it's funny, it shows us glimpses of the lives our ancestors would have led all those years ago.

A final note before you read the poem: some of the language it contains may be a bit hard to understand so I've put together a short glossary which explains some of the words. You'll find it on the right if you scroll down a bit.

The Story Behind A Bush Christening

Many of the first white settlers to make their homes in the colonies of New South Wales and Queensland were poor Irish Catholic families.

They eked out livings on small farms far from any town or city, seeing few visitors and never travelling far from their 'shanty' homes.

The priests travelled around on horseback, with 'parishes' that covered hundreds of square miles, visiting their parishioners in their homes. Years sometimes passed between these visits so it was not uncommon for children to be a few years old by the time they were christened.

In fact, one of my great-grandmothers and her sister were born in the early 1860s on the goldfields out past Mudgee in New South Wales and were christened by one of these travelling priests.

Their father was digging for gold and he and all the other hopeful diggers lived in tents where, I imagine, the two girls were born. There were no buildings or other amenities and the priest visited from time to time on horseback, just as he does in A Bush Christening. 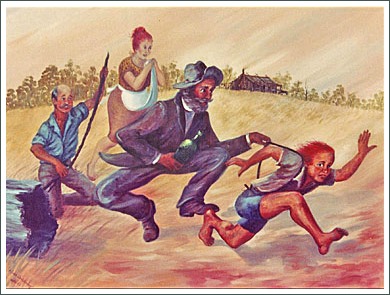 On the outer Barcoo where the churches are few,
And men of religion are scanty,
On a road never cross'd 'cept by folk that are lost,
One Michael Magee had a shanty.

Now this Mike was the dad of a ten year old lad,
Plump, healthy, and stoutly conditioned;
He was strong as the best, but poor Mike had no rest
For the youngster had never been christened.

And his wife used to cry, "If the darlin' should die
Saint Peter would not recognise him."
But by luck he survived till a preacher arrived,
Who agreed straightaway to baptise him.

Now the artful young rogue, while they held their collogue,
With his ear to the keyhole was listenin',
And he muttered in fright, while his features turned white,
"What the divil and all is this christenin'?"

He was none of your dolts, he had seen them brand colts,
And it seemed to his small understanding,
If the man in the frock made him one of the flock,
It must mean something very like branding.

So away with a rush he set off for the bush,
While the tears in his eyelids they glistened —
"Tis outrageous," says he, "to brand youngsters like me,
I'll be dashed if I'll stop to be christened!"

Like a young native dog he ran into a log,
And his father with language uncivil,
Never heeding the 'praste' cried aloud in his haste,
"Come out and be christened, you divil!"

But he lay there as snug as a bug in a rug,
And his parents in vain might reprove him,
Till his reverence spoke (he was fond of a joke)
"I've a notion," says he, "that'll move him."

"Poke a stick up the log, give the spalpeen a prog;
Poke him aisy — don't hurt him or maim him,
'Tis not long that he'll stand, I've the water at hand,
As he rushes out this end I'll name him.

"Here he comes, and for shame! ye've forgotten the name —
Is it Patsy or Michael or Dinnis?"
Here the youngster ran out, and the priest gave a shout —
"Take your chance, anyhow, wid `Maginnis'!"

As the howling young cub ran away to the scrub
Where he knew that pursuit would be risky,
The priest, as he fled, flung a flask at his head
That was labelled 'MAGINNIS'S WHISKY'!

And Maginnis Magee has been made a J.P.,
And the one thing he hates more than sin is
To be asked by the folk, who have heard of the joke,
How he came to be christened 'Maginnis'!

What does that word mean?

Here's a list of some of the less-common words in the poem, along with a definition

Barcoo ~ a region in central western Queensland in Australia, named for the Barcoo River

spalpeen ~ an Irish term for a rascal

scrub ~ parts of the Australian bush characterised by low-growing plants