The Twilight series is a series of books for teenagers and young adults written by American author, Stephenie Meyer (that's her in the photo below).

The books have been incredibly popular with teen girls and even with teen boys since the first book, Twilight appeared in 2005.

The books became even more popular after the first Twilight film was released on 21 November 2008, starring Kristen Stewart, Robert Pattinson and Taylor Lautner. 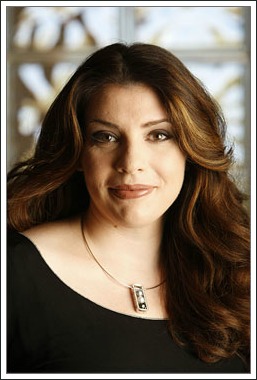 Should you let your daughter read the Twilight series?

Not all parents are happy to let their young teen read the Twilight Series so let's look briefly at what the books are about.

Most people have a vague idea of the storyline.

Seventeen-year-old Bella Swan moves to a small town in the US and meets a seriously gorgeous but mysterious guy who turns out to be a vampire. This is unrequited-teenage-love-meets-the-supernatural with enough danger and mystery to make it adult.

The books are really aimed at 14-17-year-old girls but they have also been popular with younger girls so I think it pays to be careful if your daughter, like mine is keen to read them at a young age.

There are some quite dark bits and some very mature themes so, if you're at all in doubt, check them out first yourself before you let her read them.

This is where it pays to be a reader yourself.

I allowed my daughter to read the first Twilight book when she was thirteen but had second thoughts and so thought I'd better read it myself. I then powered through the whole series to keep ahead of her so that we could discuss the story as she read. And let me tell you, these are loooong books!

To be honest, I was also concerned about some of the messages I think young girls take from this book.

It's a fine line between exploring the issues that concern many teen-aged girls (like having a boyfriend and surrendering yourself completely to a relationship) and reinforcing the importance of these issues.

If your daughter reads these books, I think it's important to discuss these issues with her so that she thinks about them, rather than just absorbing them.

There is enough darkness and teenage angst in Twilight to interest some boys too. One of my sons read the series, one showed no interest at all.

The four books in the series are: