The Fairies was originally a French fairy tale, first published in 1697 in a book written by Charles Perrault.

The story's original French title was Les Fées and the book was called 'Histoires ou contes du temps passé, avec des moralités' which translates as 'Stories or Tales from Times Past, with Morals'.

Interestingly, the book's frontispiece shows an illustration of an old woman spinning and telling stories with the words 'Contes de ma Mere l'Oye' ('Tales of My Mother the Goose'.) 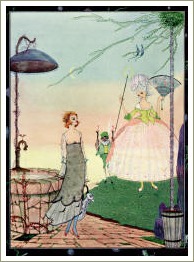 This is the earliest known reference in print to Mother Goose and seems to indicate that the name was originally connected with stories, rather than with the rhymes and songs we know today as Mother Goose nursery rhymes.

Although he was the first to publish the story, Charles Perrault didn't actually write The Fairies himself. Like the other stories in his book, the tale was already well-known in Europe as part of an oral tradition of story telling going back hundreds of years.

Perrault may not have written The Fairies but he was the first to write it down and he did so with wit and style.

His book was an immediate success, was quickly translated into English and, of course, we know that the English-speaking world loved the stories as much as the French did!

The story on this page is the original tale of The Fairies, as translated from the story written in French by Charles Perrault in 1697.

Once upon a time there was a widow who had two daughters. The elder was often mistaken for her mother, so like her was she both in nature and in looks. Both of them were so disagreeable and arrogant that no one could live with them.

The younger girl, who was a true likeness of her father in the gentleness and sweetness of her disposition, was also one of the most beautiful girls imaginable. The mother doted on the elder daughter naturally enough, since she resembled her so closely; and she disliked the younger one just as intensely. She made her eat all her meals in the kitchen and work from morning till night.

One of the poor child's many duties was to go twice a day and draw water from a spring a good half mile away, bringing it back in a large pitcher. One day when she was at the spring an old woman came up and begged for a drink.

"Why, certainly, good mother," said the beautiful girl. Rinsing the pitcher, she drew some water from the cleanest part of the spring and handed it to her, lifting up the pitcher so that she might drink more easily.

Now this old woman was a fairy, who had taken the form of a poor peasant woman to see just how far the girl's good nature would go. "You are so beautiful," she said, when she had finished drinking, "and so polite, that I am determined to bestow a gift upon you. I grant you," the fairy continued, "that with every word you speak, a flower or a precious stone shall fall from your mouth."

When the beautiful girl arrived at home, her mother scolded her for staying so long at the spring.

"I beg your pardon, mother," said the poor child, "for having taken so long," and as she spoke these words, two roses, two pearls, and two large diamonds fell from her mouth.

"What am I seeing?" cried her mother. "I do believe that I saw pearls and diamonds dropping out of your mouth? What have you been doing, my daughter?" (This was the first time she had ever called her her daughter.)

The poor child related what had happened, scattering countless diamonds as she spoke.

"Indeed!" cried her mother. "I must send my own daughter there. Come here, Fanchon. Look what comes out of your sister's mouth whenever she speaks! Wouldn't you like to be able to do the same thing? All you have to do is to go and draw some water at the spring, and when a poor woman asks you for a drink, give it to her very nicely."

"You want to see me going to the spring?" replied the ill-mannered girl.

"I am telling you that you are to go," replied the mother, "and this very instant!"

Very sulkily the girl went out taking with her the best silver flask in the house. No sooner had she reached the spring than she saw a magnificently dressed lady, who came out of the woods towards her and asked for a drink. This was the same fairy who had appeared to her sister, but she was now disguised as a princess in order to see how far this girl's bad manners would go.

"You are not very polite," replied the fairy, showing no anger. "Very well! In return for your lack of courtesy I grant that for every word you speak a snake or a toad shall drop out of your mouth."

As soon as her mother saw her returning she cried out, "Well, daughter!"

"Well, mother?" replied the rude girl. As she spoke two vipers and two toads fell from her mouth.

"Heavens!" cried the mother. "What do I see? Her sister is the cause of this. She will pay for it!"

Off she ran to beat her, but the poor child ran off and escaped into the woods nearby. The king's son met her on his way home from hunting, and noticing how beautiful she was, he asked her what she was doing there all alone, and why she was crying.

"Alas, sir, my mother has driven me from home."

As she spoke the king's son saw five or six pearls and as many diamonds fall from her mouth. He begged her to tell him how this came about, and she told him the whole story.

The king's son fell in love with her, and considering that such a gift as had been bestowed upon her was worth more than any dowry that he might receive from someone else, he took her to his father's royal palace, where he married her.

As for her sister, she made herself so hateful that her own mother drove her out of the house. No one would take in the miserable girl, so at last she went into a corner of the woods and died.

Diamonds and gold coins may
Work some wonders in their way;
But a gentle word is worth
More than all the gems on earth.

Though - when otherwise inclined -
It's a trouble to be kind,
Often it will bring you good
When you least believed it could.